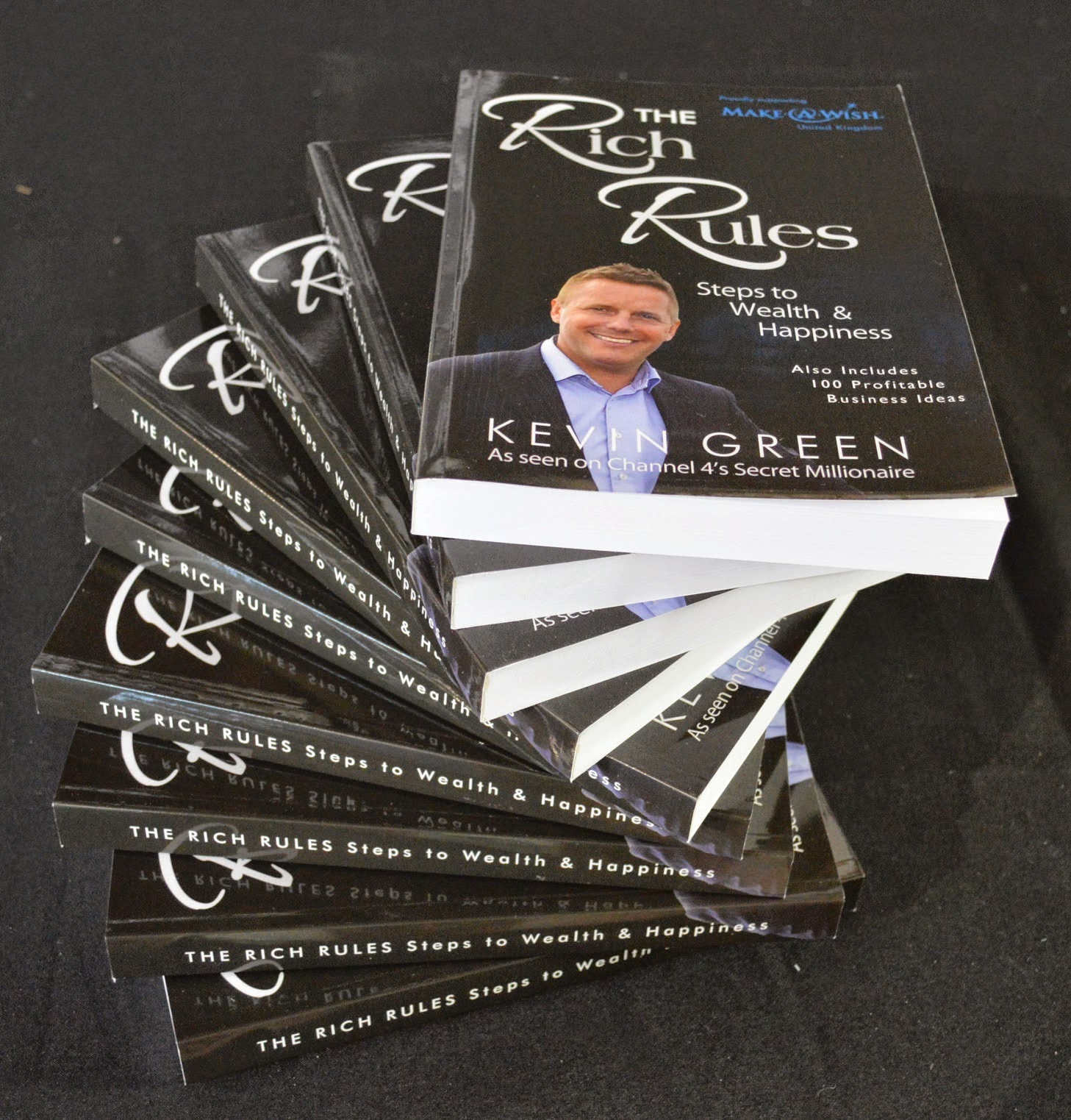 For a man who’s been “too busy” to spend time promoting his new book, Kevin Green can still afford to smile this week.

In the space of five days, more than 1000 copies of The Rich Rules have been sold – and the book has just gone ‘live’ on Amazon.
The book was launched at Wrexham’s new Carnival of Books festival – but Green has found it difficult finding the time to promote a book which majors on ‘steps to wealth and happiness’.
“Just after launching the book, I was heading for the airport to board a flight to South Africa for a speaking engagement in Johannesburg,” said 51-year-old Green.
“It seems to be the way of things nowadays as I am lucky to be in demand as a business and motivation public speaker at major events worldwide.
“I had to fit in the book launch just after returning from a trip to New Zealand, so the last few weeks have been a whirlwind and getting time to promote the new book has been a struggle.
“It’s been a bonkers couple of weeks with all the travelling and I’ve been too busy to worry too much about how the book is selling.
“Having said that, there’s been a flurry of activity and interest in the book, which also promises to give the reader 100 profitable business ideas.
“It’s self-penned, which may surprise many as it is well-known that I am dyslexic.
“That was a challenge, but I worked my way around it and I’m very pleased with the end result.”
Public speaking takes up a lot of Green’s time nowadays, but he finds it all very rewarding.
“I’ve been privileged to be on the same speaking bill as former United States President Bill Clinton. Last weekend, I was on the same bill as Nick Vujicic, a truly inspirational Australian who was born with no arms and no legs.

“Nick has a motto, ‘No limbs, No limits’. He’s simply remarkable and a wonderful inspiration.

“I share Nick’s passion for inspiring and encouraging other people to do better, so the public speaking thing is something very dear to my heart. I believe passionately in helping other people.”

Green, now one of the UK’s biggest private sector landlords has revealed his secrets to success in his new book, full title, The Rich Rules, Steps to Wealth and Happiness.

“The book is about helping others get in the right mind set to achieve success.

“And part of that is about telling my story and how I got there. It’s a no holds barred, ‘this is me’ book, and I know some people might think I’m a bit weird, but that’s OK, Entrepreneurs tend to be a little bit different.”

Green was homeless in 1988 and his story is truly one of rags to riches.

The Rich Rules Steps to Wealth and Happiness is published by Gomer Press, price £9.97.

Green is an ambassador for the Make A Wish charity which grants wishes to seriously ill children and 10 per cent of the purchase price of the book will be donated to the charity (a minimum of 99p per sale of each book).

The Rich Rules - A New Book By Kevin Green


I am absolutely delighted my book has arrived back from Gomer Printers, thousands of copies have already been delivered to Amazon, in readiness for my book launch date on 20th April 2015 at the Wrexham Festival of Words Carnival.

As an ambassador for Make a Wish ®Foundation UK, I am really pleased they have linked their name to 'The Rich Rules' and I will donate 99p of every book sale to this extremely worthy charity that grants magical wishes to children with life threatening illnesses.

My Personal objective is to sell at least 1 Million books, raising £1 Million for Make A Wish® UK, which I will Gift Aid when transferring the donation to them to further increase their monies received.


In this book I use my own life examples and experiences to share with you the steps to becoming wealthier & happier in your life.

To ensure your copy from this first print run, please pledge your pre-order by clicking this link http://www.kevingreen.co.uk/the-rich-rules/ we will then be in touch with you shortly when the direct order link goes live to enable you to receive your copy of the The Rich Rules Book.

Competition:
On receipt of your copy of the book please take a picture of yourself holding it and post on social media sites using the hash-tag #TheRichRules, screen shot it and forward to Kevin@therichrules.com where you will be entered into a competition to win an "Apple i-pad"

There have already been some great reviews of The Rich Rules Book including those from The Winner of the Apprentice 2015, Mark Wright. Former advisor to Sir Alan Sugar, Nick Hewer
Commentator on screen star and analyst's Christine and Neil Hamilton. Star of TV's Homes Under the Hammer Martin Roberts and Former head of the BBC Sir Roger Jones OBE.

See a sample of these comments below,


"Kevin is someone of the highest integrity. I have read his book with great interest and believe that the 'Rich Rules" is essential reading for anyone whose aim is to build a high profit margin business."
Sir Roger Jones

Kevin Green is for me, one of the most inspirational people I have come across both personally and in business. He is a true entrepreneur.
I first met Kevin like many others at one of his business and property talks. I was truly blown away. Kevin’s enthusiasm for helping people in businesses and in the community really kick started my journey.
Two key things I have applied instantly and used to great advantage from The Rich Rules is “never waste a second of my time” and “how to raise capital”. I want to use this section to personally thank Kevin for motivating me. In 2013 I attended one of Kevin’s talks and read his work. Now in 2015 I am the winner of BBCs The Apprentice and I run my own successful online marketing company in the UK. I believe applying what I learnt from Kevin was a major contributor to my success.
The best decision any person can make is to want to improve. If you only learn one thing from this book (I’m sure you will learn much more, as I have!) that one piece of knowledge alone could double or even triple your income.
I have been taught that in order to make money and find success you need to learn from someone that has already done it. Kevin Green started from nothing and is now a self-made multi-millionaire.
When cooking, following a recipe works every time. Why can’t you have a recipe for success, wealth and happiness?
I believe you can. I also believe Kevin has that recipe in this book.
Mark Wright – Winner of The Apprentice 2014.

I met Kevin five years ago when we were fellow speakers at a Motivational Conference.  His is truly inspirational and I am delighted to welcome 'Rich Rules' where he shares his tremendous business knowledge and acumen to help others.
Christine Hamilton – Star of the original 'I'm a Celebrity Get Me Out Of Here', through pantomime & the Rocky Horror Show to 'MasterChef', media personality & author

If you want to be successful, copy what successful people do. From humble beginnings to becoming a respected property
multi-millionaire, Kevin has learnt invaluable lessons which he reveals in Rich Rules. It’s an inspiring and motivational journey. It’s time for you to set off….
Martin Roberts – TV Property Expert, Journalist & Author
at 1:47 pm