Thanks for all the congrats

Had some brilliant feedback this morning to the screening of the Secret Interview on Channel 5 last night.
Thanks for all your emails and Tweets.
Been a busy week for media work - on the Roy Noble Show on Radio Wales yesterday afternoon. Have just finished recording an interview for the S4C (Welsh Channel 4) show Sam ar y Sgrin, which goes out on Friday night.
at 11:40 am

I'm on Channel 5 this evening

This evening, I am on the new Secret Interview series on Channel 5 - you may have seen the previews on various TV guides in the national newspapers.
The programme is on at 8pm. Set your recorders if you can't get to watch it live.
It should be great viewing.
Weblink -
http://www.channel5.com/shows/secret-interview/episodes/estate-agents
at 7:36 am

Good to do some Dynamo work again

It's been a busy week with lots of meetings, so it's good to be wearing a different sort of hat this evening.
Tonight, I am back in action as a 'Dynamo' role model for the Welsh Government.
As one of the Dynamo team, I regularly turn out to help guide and inspire young people.
It's very rewarding work.
This evening, I am talking at the EYST, Ethnic Youth Support Team, in Swansea.
The team is based in St Helen's Road, Swansea, and the evening is being organised by 'Menter a Busnes'.
I'm looking forward to meeting the EYST team.
Here is their website -
http://eyst.org.uk/

Here's the latest press release about my appearance at a major new business show in Cardiff. More information on the weblink and on the previous post. 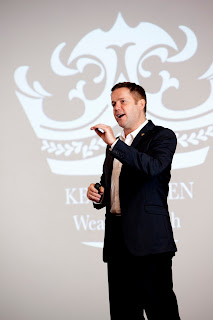 South Wales entrepreneur and millionaire Kevin Green is to top the bill at a ground-breaking South Wales business show.
Green, currently in the news for the new Channel 5 show ‘Secret Interview’ will be the keynote speaker at the first Introbiz business show at Cardiff City Stadium on Thursday, September 27.
Introbiz founder Tracey Jenkins said: “We are delighted to be able to announce Kevin Green as our main speaker for the event.
“The business show has already attracted huge interest across South Wales. Kevin Green is known as an exceptional business and motivational speaker. He is a big draw in his own right and we are very excited to have him on board as our keynote speaker.
“There’s a real buzz in the business community about this event and more than 60 trade stands have already been booked for the day.”
Green said he was looking forward to the event.
“The Introbiz team are building an excellent reputation for providing successful platforms for business networking. It should be a great event,” he said.
Green’s TV CV includes being featured on Channel Four’s Secret Millionaire and Sky’s The Devil’s Dinner Party, in addition to his appearance on the Secret Interview.
The business show will run from 10am - 3pm and occupy two floors at the stadium.
There will be a networking breakfast from 8am - 9.30am before the opening.
The cost is £10 per person. To register and book your place, email info@introbiz.co.uk
The event will be attended by Welsh sporting celebrities and will help raise money for the Autism Directory and Mencap Cymru.
Weblinks –
http://www.kevingreen.co.uk/
http://www.introbiz.co.uk/keyevent/Introbiz%20Business%20Show,%20Cardiff%20City%20Stadium.html
at 1:01 pm

Looking forward to this event next month

I'm looking forward to this event next month - Introbiz Business Show at the Cardiff City Stadium. 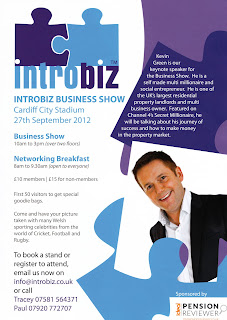 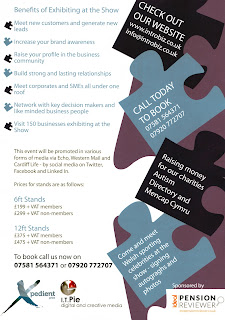 Channel 5 have confirmed the Secret Interview episode featuring yours truly will be broadcast at 8pm on Weds, August 29.
See earlier post -
http://kevingreenwealth.blogspot.co.uk/2012/08/the-secret-is-out-about-my-channel-5.html
at 11:25 am

Did you spot the trailers running on Channel 5 last night for The Secret Interview?
I guess they will be running all week now.
The episode featuring yours truly is due to air on August 29 (will confirm later).
Keen viewers will spot me in the trailers :) 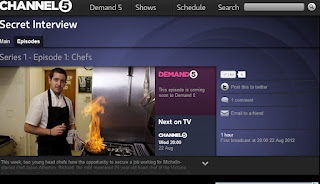 My PR man is back after his Olympics duties 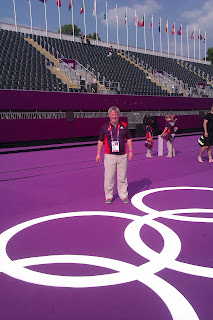 My PR man, Robert Lloyd, is back in work after his stint as a volunteer with the GamesMakers at the London 2012 Olympics.
'Team Green' was happy to give him the time off!
He's pictured at the Hyde Park venue, obviously considering taking up the traithlon very soon!
at 8:35 pm

Listen again on iPlayer to my education views 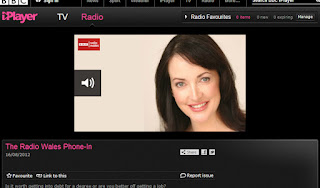 Whoops, started by saying 'Good Morning', when it should have been 'Good Afternoon', but apart from that there was a good debate on A Levels, education and the value of university studies on the Radio Wales phone-in with Mai Davies today.
Catch it again on iPlayer - http://www.bbc.co.uk/iplayer/episode/b01lwnm2/The_Radio_Wales_PhoneIn_16_08_2012/
at 4:54 pm

Tune in to Radio Wales at lunchtime today

I will be on the Radio Wales phone-in programme, from 12noon today, talking about A levels and education.
Link -
http://www.bbc.co.uk/programmes/b01lwnm2
at 11:31 am

The 'Secret' is out about my Channel 5 programme 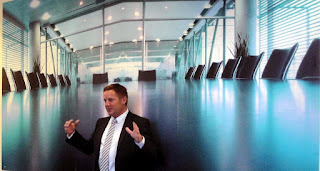 The 'Secret' is out about my new Channel 5 programme.
It’s all been very hush-hush and I couldn’t even tell my closest friends what it is all about.
Channel 5 took the wraps off the pre-publicity campaign today and I can now reveal the show is going to be called ‘Secret Interview’.
Filming was carried out earlier this year we have been busy shooting at different locations in West Wales and beyond.
The show follows my other TV appearances on Channel Four’s Secret Millionaire and Sky’s The Devil’s Dinner Party.
The Secret Interview will be unlike anything I have done previously.
The show will put eight unknowing people through an interview process they will never forget.
The unwitting candidates believe they are filming a documentary about their workplace.
In fact, they are about to have an interview for the job of a lifetime without even knowing it’s happening.
Each of them will be tested to their limits by a team of undercover actors intent on causing utter chaos.
Meanwhile, their prospective new boss watches everything.
Other stars of the Secret Interview will be Michelin starred chef Jason Atherton, the editor of women’s magazine Glamour Jo Elvin and hair stylist to the stars Nicky Clarke.
For the candidates, it’s going to be the working week of their lives and every move they make could take them a step closer to a job with the Secret Interviewers that could transform their world.
Watch out for episode two, when a pair of hopeful estate agents come up against bogus buyers and tenants from hell whilst having to remain calm and collected.
Co-produced by Twofour and GroupM Entertainment, Secret Interview will air on Channel 5 later this month.

Other information:
The series is made up of 4 x 60 minute episodes that will air from late August.
For all the latest about Channel 5, follow twitter.com/channel5press
About GroupM
The primary role of GroupM Entertainment is to produce, finance and distribute entertainment properties for a wide range of international TV and digital markets. The company's primary business interests extend across all media platforms and a variety of genres, including entertainment, factual entertainment, factual and drama.
About Channel 5
Channel 5 was launched as Britain's fifth and final terrestrial broadcaster in March 1997. In July 2010, the network was sold to British media powerhouse Northern & Shell and it currently attracts well over 30 million viewers a week. Channel 5 is the destination for must see entertainment, sport, documentary, kids, drama, film and news output. Pivotal channel programming includes a diverse mix to attract viewers of all age, including the Extraordinary People and Revealed strands, Cowboy Builders, The Hotel Inspector, , The Gadget Show, Home & Away, Neighbours, 5 News as well as the award winning children's strand, Milkshake! In addition it is the terrestrial home of all England Cricket summer Internationals. Joining their highly successful crime drama franchises in 2012 are two big new US acquisitions – fantasy drama Once Upon A Time and the hugely anticipated return of a revamped 21st Century Dallas.
About Twofour:
Twofour is an award winning television producer creating factual, features and entertainment programming for leading broadcasters across the UK and international market. http://www.twofourbroadcast.com/
at 4:48 pm

Great day yesterday at the new 'Innovation Foundry' at the Dylan Thomas centre in Swansea.
Here is the press release about the event - 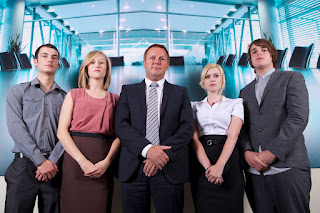 The first students have signed up for a new, fast track course that will set them on the path to business greatness.
The Entrepreneurship Academy Wales is the first of its kind in Wales and is being endorsed by entrepreneur and ‘Secret Millionaire’ Kevin Green, with further sponsorship support from Euros Jones-Evans from Telesgop, and Admiral Insurance.
The free, one year programme will lead to a BTEC qualification in Enterprise and Entrepreneurship and is open to aspiring young business leaders aged between 16 and 19.
Delivered from the Innovation Foundry at the Dylan Thomas Centre, the Academy promotes a philosophy of ‘learning by doing’ that sees students work alongside successful business figures, attend masterclasses, undertake work experience and ultimately start their own businesses.
The first four students to enrol are Joshua Dykes from Pontardawe, Geraint Vaughan and Jade Jones from Pontarddulais and Marissa Bartle from Llangennech.
Although they have very different business models in mind, from event management and photography to art and property development, all four agree on one thing - that this is an exciting, once in a lifetime opportunity.
“It’s a great feeling to be among the first students to sign up for the new Academy as there are only 16 places available in total,” says Joshua. “Having the support and guidance of Kevin Green and the other partners is an amazing opportunity for us and we can’t wait to get started.”
“I personally would have benefitted from an initiative like this when I was in school,” adds Kevin. “With a lot of hard work and passion, these students will go on to become the business leaders of tomorrow and I’m very proud to be involved and to be able to lend my support from the earliest stages of the process.”
“Today is the realisation of a dream that has been three years in the making,” says Sue Poole, Education Enterprise Manager at Gower College Swansea, which is delivering the Academy. “We are passionate about inspiring the next generation of young entrepreneurs from across Wales and are delighted to work alongside our partners to develop the talents of these exceptional young people.”
The Academy also has the backing of Cllr Mike Day and Cllr Mitchell Theaker, who both spoke of the importance of encouraging the development of skills, initiative and drive in young people.
The Academy will be officially launched in the presence of Edwina Hart AM on 8 October at the Innovation Foundry at the Dylan Thomas Centre.
Anyone interested in enrolling on the Entrepreneurship Academy Wales or becoming a partner should contact Sue Poole on 01792 284000 or email sue.poole@gowercollegeswansea.ac.uk
Related links:
www.entrepreneurshipacademywales.co.uk
www.gowercollegeswansea.ac.uk

Behind the scenes photos - 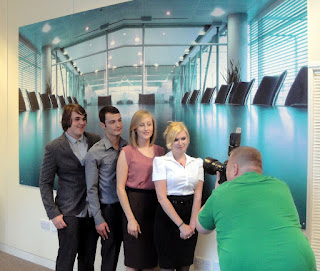 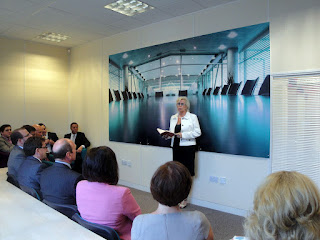 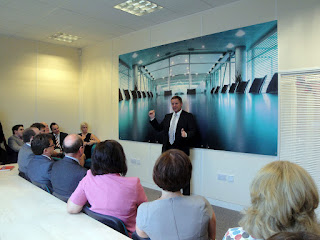