Looking forward to a big awards night in Cardiff this evening.
I am the guest speaker at the Welsh Government's Youth Excellence Awards.
The awards are part of the Dynamo - Big Ideas Wales - project.
I am a Dynamo role model and frequently visit schools and colleges to give inspirational talks on business.
I am presenting awards in the following categories -
It promises to be a great evening and I'm looking forward to it.
at 12:55 pm

I've accepted an invitation to give a talk at my old agricultural college.
I was in the Class of 1981-82 with agricultural students of Gelli Aur College, now Coleg Sir Gar.
The invitation to return comes from David Davies, who is Curriculum Head Land-Based Studies at  Coleg Sir Gar Gelli Aur and Pibwrlwyd Campuses.
The plan is for the current students to stage a BBQ.
I will then give a talk on the benefits of travel and how it expands your horizons.
Should be great fun - and let's hope it's a sunny June evening.
at 12:31 pm

Nice to catch up with Fraser

It was good to catch up with Fraser O'Brien, the budding Welsh star of motorsport, over a coffee at Machynys Golf Club.
Fraser has high hopes of competing in the prestigious European Porsche supercar races this spring and summer.
You can find out more about him on his website called Driving The Dragon -
http://www.drivingwalesforward.co.uk/
at 1:04 pm

Good luck to 'A Passion for Homes' team 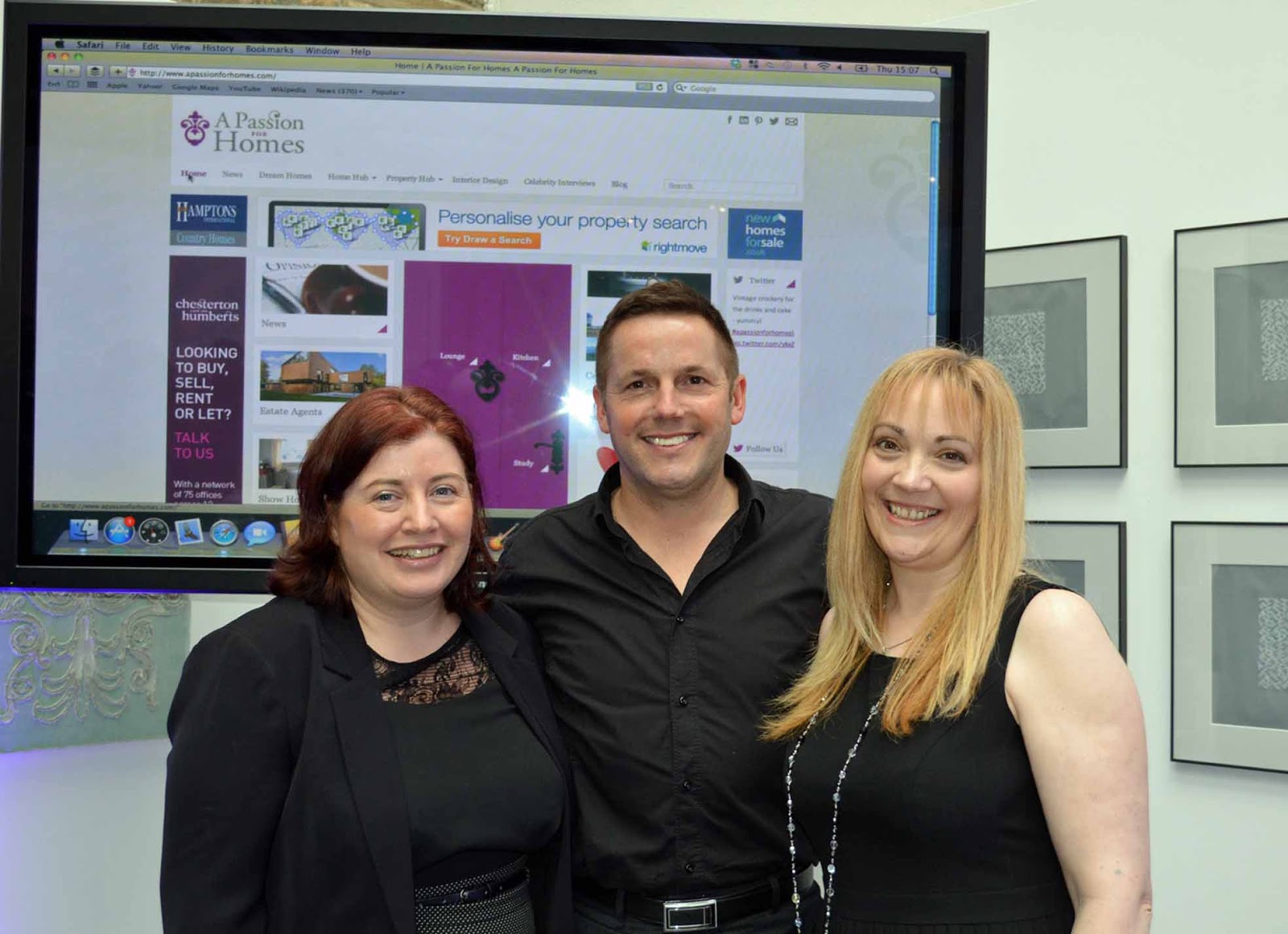 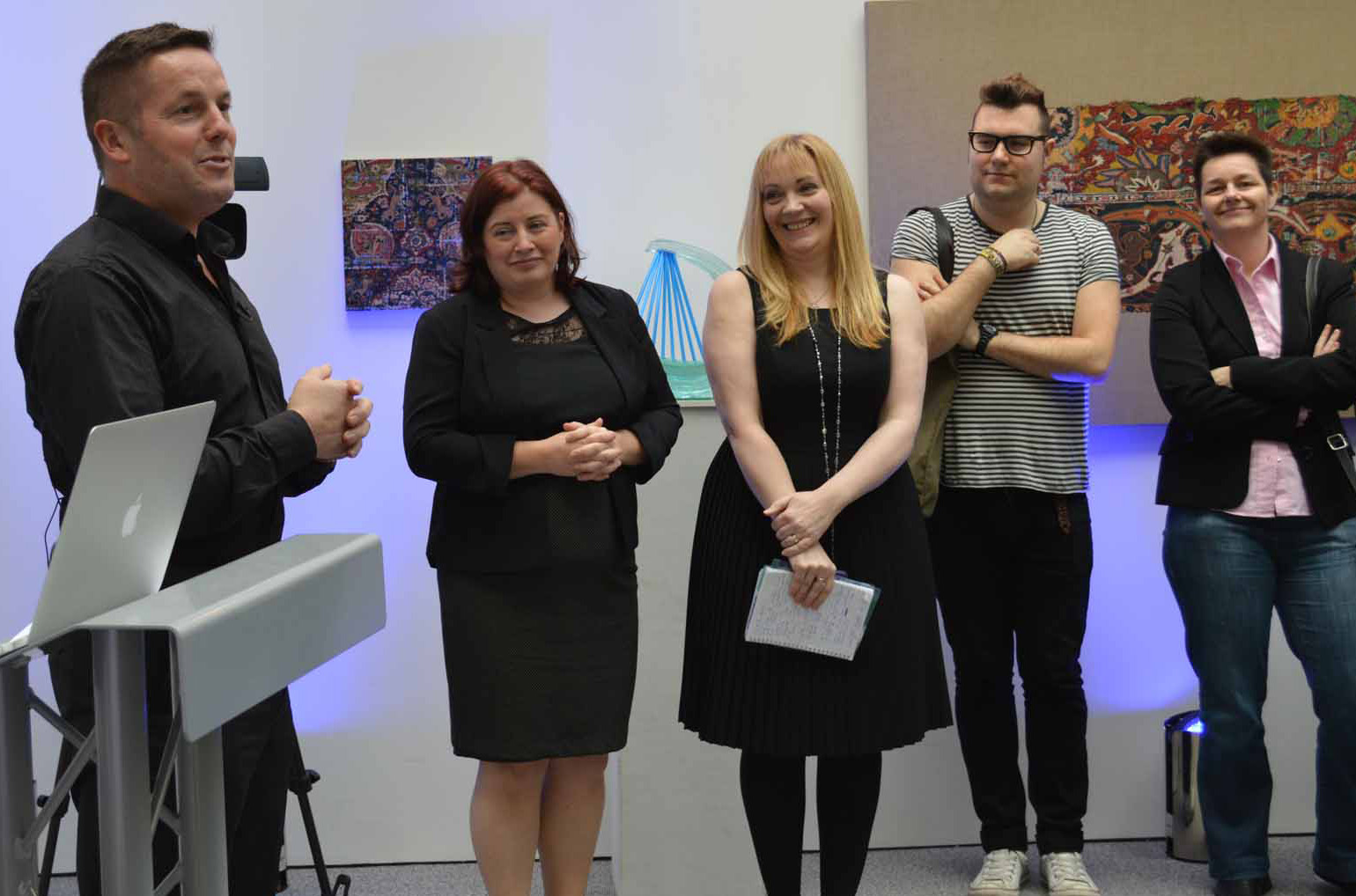 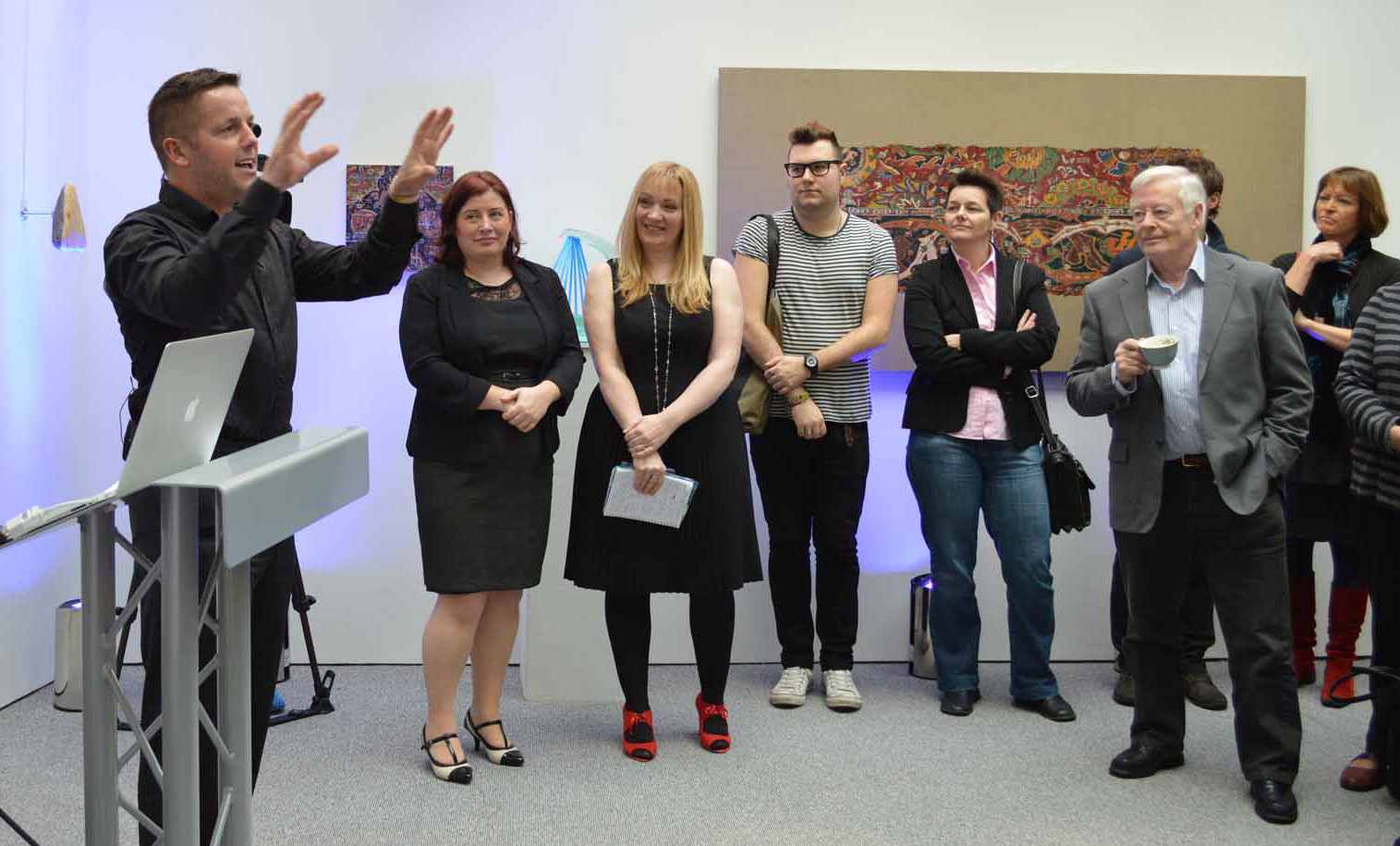 I was delighted to spend at least some of my Valentine's Day in London helping two go-ahead ladies launch their new website.
The website is called A Passion for Homes and the address is -
http://www.apassionforhomes.com/
You can find out more about the venture on -
http://www.apassionforhomes.com/wp-content/uploads/A-Passion-For-Homes-Info-Pack-web.pdf
The launch was held in a very swish property just off Bermondsey Road, near The Shard in London.
I was delighted to give the keynote address to a large audience of representatives from many different sectors of the property and home furnishings industries.
The ladies behind the venture (I'm pictured with them, above) are Jo Ridout and Andrea Morgan, who sum up their passion of property:
"With more than 30 years combined experience in business and marketing and two lifetimes of being totally passionate consumers of everything to do with property, design and homes, we are thrilled with the launch of A Passion for Homes. It's about anything to do with property - Property bookworms, interior design magazine hoarders, house programme TV addicts, building buffs, show home visitors, trade show junkies, prolific internet and blog surfers, and content generators.
"Creating A Passion for Homes is a dream come true as it allows us to share your passion for property with our first love.
"Our website fuses together stunning slideshows, information, tips, news and an interactive ‘share’ area that encourages people to share their passion for property with all of us."
Jo Ridout says:
“I have a background of 20 years creative and varied marketing experience, comprehensively covering all aspects of marketing communications and strategic development. I have a degree in Business Studies and Marketing, am CIM trained in e-marketing and love nothing more than to shoot the breeze with anyone who will listen about my two passions – property and marketing!
"I love beautiful and quirky buildings (with a special place in my heart for the 1930s and towers and turrets), classic kitchenware, bold wallpaper and coloured lighting. Oh yes, and cake stands!"
Andrea Morgan says:
“It started with my dolls house and now its real houses, but from child to adult my passion for everything property just keeps growing. On Twitter known as @RightmoveAddict, I share amazing properties from around the world from the quirky to the opulent. I love interior design, from the simplicity of neutrals to the drama of colour, from scrumptious fabrics to concrete masterpieces, the endless combinations fascinate me.
"Experienced professional in business development, social media and venue and event management, I
am also a Chartered Manager.”
Good luck to Jo and Andrea on their new venture!

More pictures from the launch -

Off to Devon for a speaking enagagement later

Looking forward to travelling to Devon later to give a business talk to the Dairy Co farming group.
The venue is the Arundell Arms at Lifton.
I'm really looking forward to it as I've not spoken to a farming group for ages.
For those of you who don't know my farming links, my family background is in farming and I was a member of the Gelli Aur Agricultural College (now Coleg Sir Gar) Class of 1981-82.
When I won a Nuffield Scholarship, part of my duties included speaking to farming organisations.
Looking forward to catching up with the the Devon farmers later.
at 9:55 am

Dates for your diary 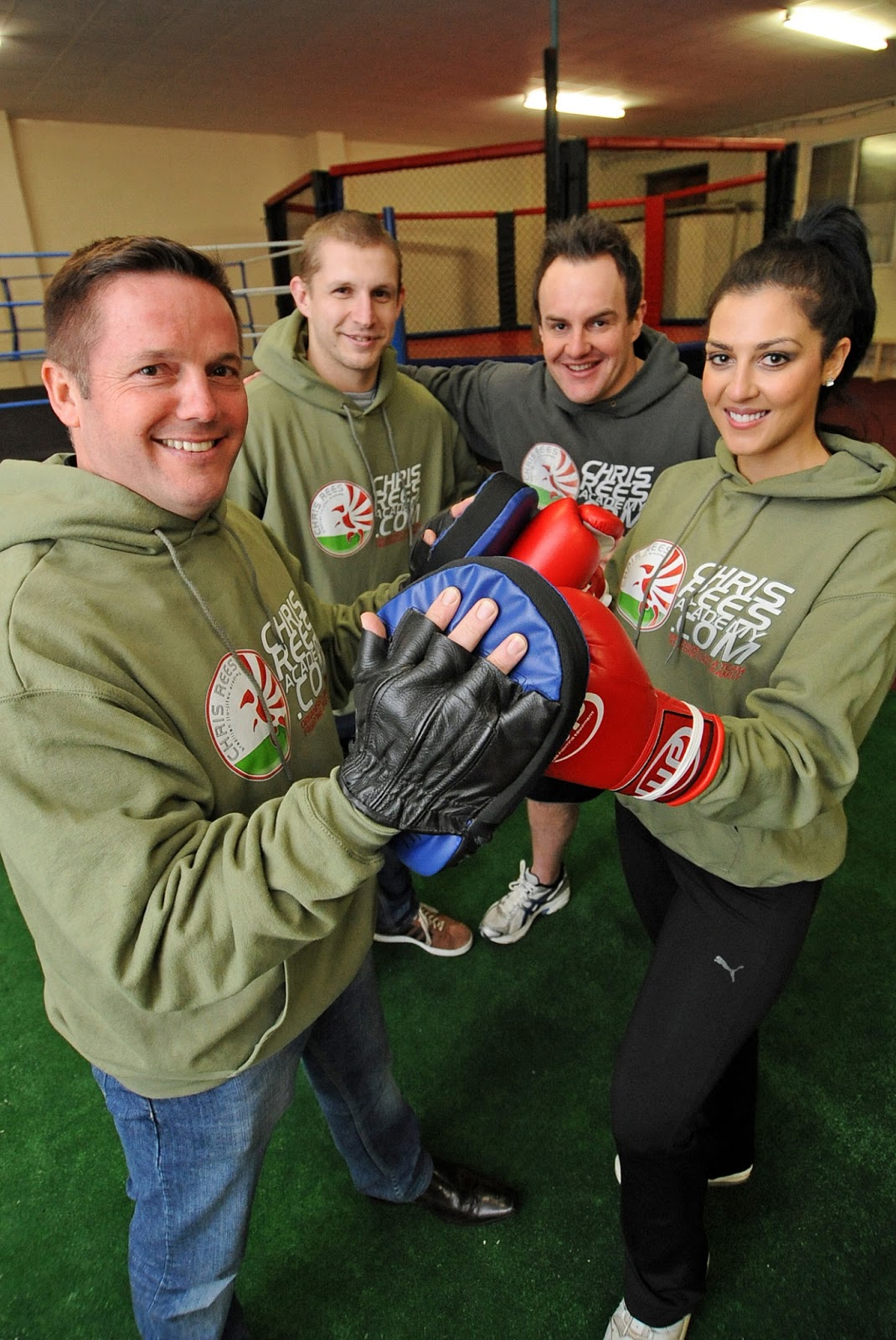 Great fun yesterday at the launch of a new Mixed Martial Arts (MMA) gym in Fforestfach, Swansea.
I joined Bollywood Actress Samira Mohamed Ali to help conduct the official launch of the gym, the biggest MMA Gym in Wales.
Here is the official press release -
On Sunday, self made multi-millionaire Kevin Green and Neath based Bollywood Actress Samira Mohamed Ali launched the biggest Mixed Martial Arts (MMA) gym in Wales – CHRIS REES FIT2FIGHT MMA GYM at Ystrad Road, Fforestfach, Swansea.
CRA Fit2Fight gym was the launching pad for the new MMA online TV Channel for Wales - www.mmawales.tv and local film crews and local media were invited along to see all the facilities in the new 100-person capacity gym.
They all had the chance to meet and see two of the local MMA Pro fighters, Brett 'Pikey' Johns and Dino Gambatesa demonstrating the sport.
It was a family day, and a raffle was held to raise money for Cancer Research Wales.
Kevin Green likes to keep fit and healthy on a daily basis, but participated in MMA training for the first time ever on Sunday.
He said; "This is such an exciting venture to launch here in Swansea especially in the current challenging economic climate. It’s great to see small businesses such as the Chris Rees Academy and Fit for Life expanding and being in tune with the exploding MMA market that’s sweeping across Europe.
"I am fully supportive of the gym, and I have also committed to being one of the main sponsors of the new MMA WALES TV”.
Samira Mohamed Ali will start her fitness training next week with Chris Rees, before she goes away on March 20 to India to film her biggest Feature Film to date BADSHAH.
She said "I think the new Fit2Fight gym is great because it offers self-defence classes for women and kids in the schedule every week, as well as tailored classes for members wishing to get fit. Bearing in mind the atrocities against women in India recently, I feel it’s so important that women learn self-defence to protect themselves in society."

Chris Rees Academy has more than 1,000 members across South and Mid Wales and is taught by Chris Rees, the only black belt Brazilian Jui-Jitsu Instructor in Wales.
It has clubs in Swansea, Cardiff, Aberystwyth and Bridgend.
Kevin Green is also involved in coaching under his own brand of Kevin Green Wealth (KGW) and is a ‘Dynamo’ role model for the Welsh Government, inspiring young people in schools and universities to set up businesses.
Green is a self-made multi-millionaire and social entrepreneur. He is one of the UK’s largest residential property landlords and a multi-business owner.
Samira Mohamed Ali, former Miss Europe who lives in Neath will start filming her fourth feature film on 20th of March in Kannada, Southern India.
at 9:16 am